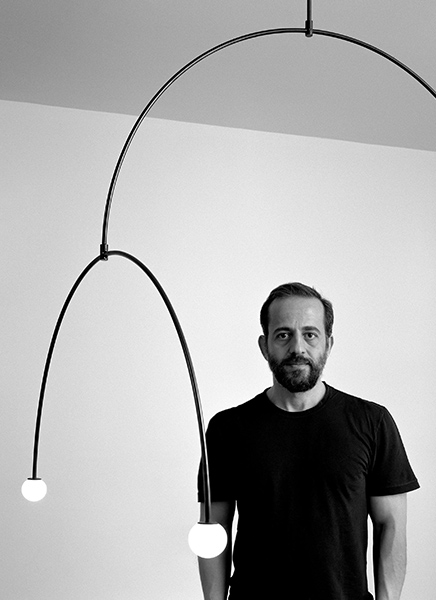 Michael Anastassiades is a Cypriot designer, based in London. He launched his studio in 1994 to explore contemporary notions of culture and aesthetics through a combination of product, furniture and environmental design. Positioned between fine art and design, his work aims to provoke dialogue, participation and interaction. He creates objects that are minimal, utilitarian and almost mundane yet full of a vitality one might not expect. Anastassiades’ work is featured in permanent collections at the Museum Of Modern Art in New York, the Victoria and Albert museum, the Crafts Council in London, the FRAC Centre in Orleans France and the MAK in Vienna. Recent solo exhibitions include Time And Again at the Geymüllerschlössel/MAK in Vienna, To Be Perfectly Frank at Svenskt Tenn in Stockholm, Norfolk House music room at the Victoria & Albert museum in London, Cyprus Presidency at the European Parliament in Brussels Belgium, Atelier Jesper Brussels . He has designed products with various leading manufacturers including Flos, Puiforcat, Lobmeyr and Svenskt Tenn. In 2007 he set up Michael Anastassiades the company to produce his signature pieces, a collection of lighting, furniture, jewellery and tabletop objects. The studio’s philosophy is a continuous search for eclecticism, individuality and timeless qualities in design. Michael trained as a civil engineer at London’s Imperial College of Science Technology and Medicine before taking a masters degree in industrial design at the Royal College of Art.